Dear Millennials: Your Chance to Change the World Is at Hand – Will You Come Through?

Most of us really love the Millennials all around us. My daughter is one and so are the offspring of my sisters and of our best friends. They blow us away every time with their ambition for excellence and for a just, inclusive, and sustainable world. In the workplace this translates into bringing contagious energy, smarts, dedication, and speed.

Yet, when it comes to being participants in elections where the results affect us all, Millennials are letting us — and their own generation — down.

In an era where just about everything most Millennials tend to care about passionately are affected by the policy decisions of elected officials – equality for women, inclusion of all races, no judgment of those who are LGBTQ+, sane gun control, a welcoming society for refugees and immigrants, fair and equitable internet access, student loan relief, and environmental care – the Pew Research Center tells us that just 49 percent of eligible Millennial voters voted in 2016, compared with 69 percent of eligible Baby Boomers.

This percentage gap matters because if it were to be narrowed, elections results would be different. Millennials (people between the ages of 18-35) are now as large of a potential political force as Baby Boomers according to the U.S. census. Both generations are roughly 31 percent of the overall electorate. In contrast, the Silent/Greatest Generation (ages 71+) is roughly 12 percent of the voting pool, while Generation X (ages 36-51) makes up about 25 percent (see chart). 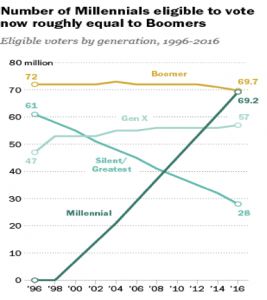 Baby Boomers reached their peak voting power in 2004. Since then, that population has been dying; while, at the same time, Millennials have been turning 18 and therefore increasing as a percent of the voter pool. So, your political power has been growing in potentiality in the past few years and will only increase. But potentiality only matters if you translate your numbers and your vast diversity (44% of all Millennials are people of color) into actual votes.

And therein is the problem.

As the Pew analysis points out — this all refers to potential, not actual political clout. In the 2016 election, despite having the same number of eligible voters as Boomers, Millennials made up 25 percent of the electorate vs. the 35 percent of voters who were Baby Boomers — which translated into a difference of 14 million votes.

What do Millennials and the generations after them face if their interests are not represented in our elected officials’ agendas?

Continued mass shootings by AK15s in schools, workplaces, and places of worship. Youth graduating from college with an average of nearly $40,000 in student debt and with over 2 million graduates on the hook for more than $100,000. Latino youth who have DACA status continuing to live under the threat of deportation to countries they don’t even know. The continued rending of families as parents, aunts, uncles, neighbors, and kids are locked up in detention centers.

The list goes on. Black youth who will continue to be afraid to walk, drive, swim, shop, and read while Black. All youth holding the bag of multi-trillion-dollar federal debt that then leads to resource scarcity that already limits the government’s ability to address the needs of the country’s healthcare, education, and infrastructure.

And while your favorite people are being chased out, disenfranchised, bullied, arrested, deported — even killed — the planet itself is under siege. Coral reefs are dying, icecaps receding, oceans rising, deserts expanding, species becoming extinct. All of this leading to the displacement of people fleeing famine, drought, and flooding, who then become part of a mounting refugee tide with no place to go as borders shut down.

The powers that be have a better understanding of your voting power than you seem to have. That’s why the efforts are many to disenfranchise you from voting. In various states student IDs are declared not being acceptable as a form of ID for students living in those states during their college years, polling places in heavy minority neighborhoods are being closed, and a disproportionate number of minority voters purged from registered voter lists.

Sure, wear your Kaepernick t-shirt and your Nike shoes and tweet and retweet #MeToo #BlackLivesMatter #NoFamilySeparation #MarchForOurLives #Basta #WontBeErased to trigger the viral wave. Having your voice heard is essential and a start.

But if you don’t vote your social media broadcasted voice will be like shouting into the wind. Because in elections it’s the vote that counts.

There are many in the other generations who share your values, who want more than anything a better future for you and the generations behind you. And we will do our part. We implore you to do yours.

The deck is indeed stacked against you. It’s not a level playing field. But no one is going to level it for you. You must step it up, and show up with overwhelming force. It’s the only way to overcome the tilt against your own interests.

You have  always said you want to save the world. You have held your elders accountable in corporations – Starbucks, Unilever, Uber, so many others — to stand up for just and inclusive practices because you recognize that they are powerful and influential.

And so are you.