Inclusive Leadership: Standing Up for Those Who Take a Knee 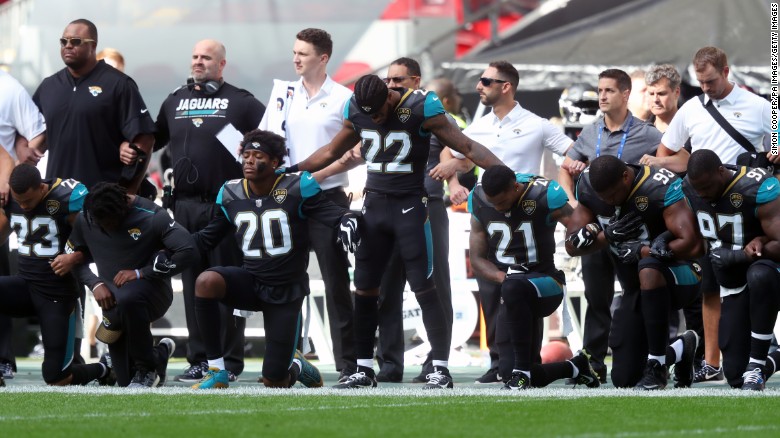 As a leader and as someone who coaches executive leaders, these truisms are as fundamental as it gets.

When Donald Trump chose to denigrate Black players who have taken a knee as a demonstration of police brutality against Blacks, leadership emerged from two important camps.

The first came from Black athletes such as LeBron James who unequivocally declared they could not stand by silently when one of their own was attacked. That brotherly solidarity showed up across gridirons not just coast-to-coast in the USA but the wave began in Wembley Stadium in London where the Jacksonville Jaguars and the Baltimore Ravens were playing a regulation game as part of the NFL’s European fan expansion

The second camp was that of allies. While for LeBron that solidarity was racial as well as for a fellow athlete, a fellow citizen, and for the American value of free expression, for Bruce Maxwell of the Oakland A’s who was the first MLB player to take a knee during the playing of the Star Spangled Banner, it was about three out of the four same reasons.

Particularly vital is the solidarity that many NFL owners, coaches, and other staff demonstrated with the Black players on their teams. While some chose to also kneel, others linked arm-in-arm on the field with their players. Many owners tweeted declarations of support, and even of condemnation of Trump’s remarks, but some, like Jaguars owner Shahid Khan, took to the field on Wembley and stood in embrace alongside his players.

For corporate executives there are relevant inclusive leadership lessons here:

First, stand up for all your workforce. With the most diverse workforce ever in history, an attack on any underrepresented group is an attack on vital members of your workforce. To not stand up to attacks in the public square of diverse people is to not stand up for your employees. Tim Cook gets this, saying in a memo to Apple employees referring to the attempted repeal of  DACA, “I am deeply dismayed that 800,000 Americans — including more than 250 of our Apple coworkers — may soon find themselves cast out of the only country they’ve ever called home.”

Second, speak up against dehumanization. Political philosophy disagreements are honorable, but an attack on people based on their diversity is not a political debate. It’s about decency. Among the NFL owners who made statements in support of their players, are plenty of politically conservative and Republican supporters. They made the distinction between their political philosophy and dehumanization.

Third, use your position of privilege to protect and to influence. While the athletes have a platform to speak, their voices for equality are further augmented when executives, and particularly those from the majority culture, recognize that their stances can be a powerful counterforce to actions aimed at creating division and eroding American values. Said Shahid Khan, who actually had donated to the Trump campaign during the election, “It was a privilege to stand on the sidelines with the Jacksonville Jaguars today for the playing of the U.S. national anthem at Wembley Stadium…Our team and the NFL reflects our nation, with diversity coming in many forms — race, faith, our views and our goals. We have a lot of work to do, and we can do it, but the comments by the President make it harder. That’s why it was important…for me, to show the world that even if we may differ at times, we can and should be united in the effort to become better as people and a nation.”

These divisive times in the midst of unprecedented diversity call for gutsy inclusive leadership. Up to this point inclusive leadership was a feel-good mantle that leaders happily donned since the thought was how could inclusiveness be controversial? who could possibly be against it?

But now, we are seeing that inclusive leadership is not for the faint of heart. It takes courage and guts. Clarity of vision and willingness to act.

For those who are the targets, this means a willingness to act with self-agency while not reciprocating with denigration of the other side but rather responding in a dignified, strong, we-will-not-back-down way as we witnessed among the NFL players.

What leaders will be that kind of inclusive leader?