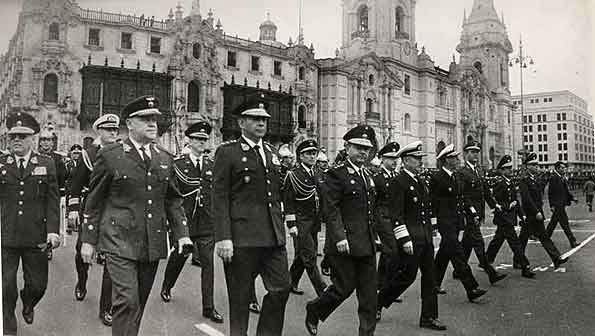 Above: Juan Velasco (Center) ruled Peru from 1968 to 1975 under the title of “President of the Revolutionary Government.”

I remember clearly the night we lost our democracy. Peruvians woke up on the morning of October 3, 1968 to the sight of tanks surrounding the government palace, the immediate shut down of the press, and the imposition of martial law.

There are times when democracy succumbs in one fatal stroke.

Then there are times – such as the one Americans face today — when democracy is eroded by a gradual yet relentless assault that corrodes its institutions like a cancer chews up cells.

In Peru, we were caught unawares by the suddenness of it all. Authoritarianism and the accompanying repression would confine us to our homes during dawn-to-dusk curfews.

Meanwhile, bolas – rumors – swept the country, with ordinary citizens having no way of verifying whether what they were hearing was real or fake. Street demonstrations were met with water tanks knocking manifestantes – protestors – off their feet and tear gas burning their eyes.

The protestors, of course, were maligned by the junta as unpatriotic, criminals, hooligans. The accusation was all that was needed to unleash the police state, which led to arrests, injuries, disappearances, and deaths.

All the while, Peruvians held on to the hope that we would be able to reclaim our democracy – one rooted like so many around the world, in the ideals of the U.S. Constitution.

In our struggle, we were to learn that democracy – like life itself – is both resilient and fragile.

I recently came across a poster at the Holocaust Museum in Washington DC. Titled, “Early Warning Signs of Fascism,” it contained the following checklist: powerful and continuing nationalism, disdain for human rights, identification of enemies as a unifying cause, supremacy of the military, rampant sexism, controlled mass media, obsession with national security, religion and government intertwined, corporate power protected, labor power suppressed, disdain for intellectuals and the arts, obsession with crime and punishment, rampant cronyism and corruption, fraudulent elections.

In Peru we met eleven of the fourteen conditions. In the United States today, the rhetoric, actions, and expressed intent of the current administration arguably meet all of them. I have lived this story before and the march toward extreme authoritarianism is one that inexorably follows its own logic to terrible conclusions.

This means that now is the time to address the early symptoms.

There are three major bulwarks against this march: institutional checks and balances, a free and independent press, and the power of a determined citizenry to take to the streets in protest when their votes have been taken away or their voices diminished.

Unfortunately, as Peruvians we did not have the foundations of 200+ year-old democratic institutions. Historically we had swung on a pendulum between dictatorship and democracy, robbing us of a legacy of checks and balances as counterweights. There was no ACLU equivalent to argue for our habeas corpus. We also did not have a strong press to amplify the voices on the street and to hold the regime accountable.

The populace was powerless against the tanks and the usurping power of the state.

It took us twelve excruciating years to remove the yoke of dictatorship, and another twenty years to restore and mature our democratic institutions to a place of stability and one where citizens have confidence in the system.

In the United States, in contrast, the institutions – the pillars of our Democracy – have been shaken but are still standing.

We have recourse in the federal and state court systems. A vigilant and skeptical press, meanwhile, will continue to be bashed by the executive but it is already responding, fueled by a renewed sense of purpose and aided by an outpouring of support from ordinary Americans who are increasingly reminded of the critical role it plays.

And then, most importantly, are the people – democracy’s guardians. There is, admittedly, a sizable portion in the country that sees in the current president someone responsive to their fears and hopes. But there are millions more who have taken to the streets to demonstrate their opposition to things like a Muslim ban and Border Wall.

Americans, when it comes to tackling a burgeoning authoritarianism in its infancy, have home field advantage. Win this struggle not just for the sake of the United States, but for democracies everywhere.

Andrés Tapia is a journalist who grew up in a bilingual, bicultural home in Lima, Perú.