Muslims are in the Workforce, but Some Companies are Being Proactive When it Comes to Inclusion.

Andrés Tapia discusses the progression of Muslim acceptance in the workforce. Companies have invested in prayer rooms, open dialogue and communication, and actively working to be inclusive. 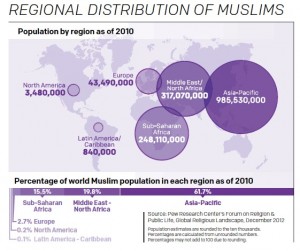 (This article was originally published in Talent Management Magazine.)

While extremist Islam gets all the press, an extraordinary number of ordinary Muslims are going about their lives around the world. They are in every blue-collar and white-collar industry, with jobs ranging from entry level to the executive suite. They are religious or secular, and they are growing in number nearly everywhere.

As of 2010, Muslims were 1.6 billion, or 23 percent, of the world’s population. In contrast, there are 2.2 billion Christians (32 percent), 1 billion Hindus (15 percent), nearly 500 million Buddhists (7 percent) and 14 million Jews (0.2 percent). According to the Pew Research Center’s Forum on Religion & Public Life, the world’s Muslim population is expected to increase by about 35 percent to 2.2 billion by 2030. Europe is expected to be 20 percent Muslim by 2050, and the United States is projected to have a larger number of Muslims by 2030 than any European country other than Russia and France. The growth is fueled by higher birthrates as well as religious conversion. But most workplaces — even those known for having inclusive cultures — are not ready for Muslims’ presence.

A global financial institution I worked with, whose credit cards are ubiquitous around the world, was caught off guard when it discovered a group of Muslim employees had been gathering underneath a stairwell to conduct their daily prayers in its U.S. global headquarters. Human resources got them a prayer room.

A global management consulting firm had to address complaints from western employees that someone was doing feet washing in the bathroom sink. They addressed it by installing a stall with a hand-held showerhead. A Muslim woman in one of my audiences called me to task because in every photo in my Power-Point that included Muslim women, they all had head coverings. This depicted a narrow range of Muslim cultural expression.

Corporations aren’t ready largely because wider society has not yet accepted this greater Muslim presence. In 2012, France forbade hijabs, the head covering many devout Muslim women wear in public. In 2013, Switzerland forbade construction of new minarets. Also in 2013, a Tanenbaum Center for Interreligious Understanding survey showed 60 percent of U.S. Muslims said they faced prejudice from most Americans. The U.S. government has had to be vigilant during the Bush and Obama administrations about hate crimes against Muslims.

But a growing number of companies are proactively being inclusive of Muslims. For example, at American Airlines, the Muslim employee resource group addressed both workplace and marketplace needs by helping get prayer rooms for Muslim passengers at Dallas/Fort Worth International Airport; the group also recommends vendors to provide halal meals on flights, and provides training for flight attendants on Muslim practices. When I led diversity at Hewitt, a group of Muslim employees suggested an infoshare where those from different faiths — Islam, Judaism and Christianity — could share with each other about Eid, Hanukkah and Christmas.

But being Muslim is not just about religious identity. It’s also cultural. Individuals choose what being Muslim means for them. Recently, after an all-day executive session with a client in Zurich, as we were walking the cobblestone streets in the center of town, I came across a sidewalk billboard announcing pisco sours from my native land, Peru. I met the host: a Muslim bar owner serving Peruvian cocktails in Zurich, which he discovered on a trek to the Andes.

Muslims have many faces.