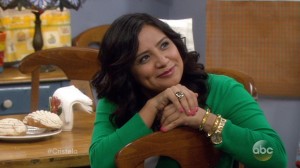 Below is a special message from Juan Andrade, president of the U.S. Hispanic Leadership Institute, that I’m passing on to you. The USHLI is a national organization that promotes civic responsibility and empowerment by conducting voter registration initiatives and leadership development programs across the country.

On Fridays, America will see a Latina law school student and her multi-generational family on network television! CRISTELA, a family comedy co-created, co-executive produced, written by and starring Cristela Alonzo is loosely based on the life and stand up routine of the Mexican American comedian.

As advocates for the Latino community, this is a moment that we can come together to combat so much negativity against our community. Whatever your roots, this is a story all Latinos can support. This is our story. It’s about an American family that happens to be Latino. Make no mistake, this is a big deal for us and a lot is at stake.

Cristela Alonzo is uniquely aware of the influence her show can have on the viewers. She is dedicated to sharing our stories (real stories) and tackling the issues that are important to our community like only a show like Cristela can do. She chose the profession of her character (Law school student) as a means to be able to bring light to the issues as an intern in a law firm in Dallas.

The power of media to change hearts and minds is very real. It is a well- known fact that media influences how white people view people of color. It won’t surprise to know we are grossly under represented on TV – save the negative images we see on the news. The very fact that this show is on the air will combat the onslaught of negative images we see every day.

In Cristela’s family – Americans will see a Latina going after her American dream to become an attorney, a small business owner working hard to support his family and a Latina Mom juggling career and children. Then there is the traditional “old school” mom that had the courage to bring her family to this country.

Cristela is the FIRST Latina to co-create co-executive produce, write and star on a network show. Her writer’s room consists of 6 Latino Writers and 2 women. This is unheard of in Hollywood.

We have a unique opportunity to come together to support portrayals of positive Latino images that are the focus of the family comedy. We have the power to make this our COSBY SHOW.

What is at stake? If we do not watch and support on social media we send a message to the halls of power in HOLLYWOOD that we don’t think it’s important to see our stories and ourselves on network TV. We know this isn’t true, but it’s just like GETTING OUT THE VOTE! If you don’t show up your not counted.