Andrés Tapia discusses how the 2014 World Cup in Brazil prodded the country to examine how far the country has come economically and how far it still has to go to provide for its citizens. 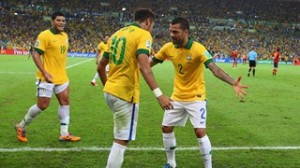 As the World Cup crowned Germany champion while host Brazil was left out of its own party, this South American nation was left to contemplate if something good can come through heartache in the wake of its World Cup devastation.

It’s been a hard fall for Brazil’s seductive romance — fueled by capirinhas, shaken by samba, and heated up on the beach. Soccer, that got its moniker as “The Beautiful Game” in large part due to the legacy of Brazil’s elegant and flowing style of play that led to their Seleção becoming the all-time greatest winner of World Cup titles, has also been an integral part of the Brazilian mystique. Then ten years ago the tropical paradise of leisure also buffed up into an economic superpower.

So when FIFA awarded the 2014 World Cup to the land of eternal beaches, Brazil’s seeming ability to have it all – economic prowess and joie de vivre – it captured the world’s imagination. Soccer fans couldn’t think of a better setting for the greatest sports event on the planet. “The World Cup in Brazil has a whole other different ring to it than the World Cup will have in [2018 host] Russia,” says Chris Quinn, a Canadian expat who is owner of an English language instruction academy in Natal whom I met in Salvador over a moqueca fish stew hours before the Costa Rica – Holland quarterfinal.

And to boot, what a marvelous opportunity this was to be to finally exorcise the ghost of the Maracanazo, Brazil’s debacle in 1950 when it lost the lead minutes before it was about to win the title the last time it hosted the World Cup.

But it was not to be. The moment of the announcement that Brazil had been awarded the 2014 tournament ended up being the peak of the Brazilian on-top-of-the-world mood. The rest of the story is now the well-known tale of the rising discontent expressed through many loud and visible protests and strikes on the eve of the games. Too many in what Brazilians identify as socioeconomic Class D began to resent the feeling they were being left behind as FIFA and the Brazilian government spent $18 billion on infrastructure and the staging of the games during a time when too many Brazilians still don’t have enough health care, education, and housing.

The protests went on pause during the global festa. It was futebol after all and Brazil had Neymar, Jr. And then came his injury and even worse, The Great Humiliation of the 7-1 loss to the German squad in the semifinal.

But as distraught as Brazilians looked on TV and splashed across newspapers around the world, this heartbreak could be the catalyst for a coming of age as an economic superpower.

Rather than assuming that they could just sashay their way to easy economic prosperity as the rest of the world boomed and raw materials exports surged, the current economic slowdown preceding the tournament was already forcing Brazilians to face the high cost of their inefficiencies and lack of adequate infrastructure.

The protests have also been forcing the government and many of those very Brazilians who have indeed benefitted from Brazil’s emergence as an economic superpower to take more seriously the destabilizing consequences of growing inequality.

Sure, a World Cup fairy tale ending crowning Brazil a sexta-champion at the very Maracana stadium of their ignoble defeat a generation ago would have spilled over into a mass endorphin and testosterone induced euphoria that would have invited breathless commentary about how Brazil was capable of anything.

But in the gloom of defeat, a more sanguine assessment can be made that even a glorious World Cup championship is no substitute for the unsexy work it takes to address deep social inequities or being able to build the right infrastructure to support a burgeoning economy.

And there is plenty of evidence that Brazilians are doing just that. For all the stereotyped fear mongering by the foreign press that the Brazilians were not going to be ready to host, they pulled off staging 54 games in twelve different cities not only through the stadium venues but also through the FIFA Fan Fests that catered to tens of thousands of soccer partiers on famed beaches and open areas with 100-foot-HD screens and where games were bracketed by first class live musical acts.

And what in the past has been Brazil’s notorious dysfunctional domestic travel in whose Kafkaesque ways I myself had gotten myself lost in, it successfully got millions of foreign and domestic fans crisscrossing the country efficiently and effectively to follow their favorite teams. Transportation to and from the stadiums was also well organized and the stadiums and the fields were top shape.

As for the still serious issue with violence in certain areas there has been significant progress. In the Rio favela Vidigal where I stayed, the pacificão, as the army incursion and occupation of the neighborhood has been called, has yielded results. “Drug gangs used to walk up and down this street in front of my house brandishing huge weapons,” says long-time resident Sonia Gallo whose B&B I stayed. “But now they are completely cleared out and have been pushed to the very top of the favela” which sits on elevation of one of many mountains surrounding Rio. “There’s a code here now in this part of the favela where we don’t hurt each other.”

This hard-earned progress with still much more to go may provide some hope of why Brazil’s 2014 World Cup humiliation may not endure as much as the pain of the Maracanazo. As an example of how things may be evolving, the New York Times quoted Celso Lacerda an employee from the national oil company Petrobras, as saying, “The game was kind of shocking, but I don’t think there’s much else to say. If this had happened in previous eras, there would be a bigger impact on Brazil.”

So yes, the shame, the embarrassment. But this time the realism. Brazil could actually come out stronger through its heartache.