With World Cup Over, Brazil Faces Its Toughest Opponent

Andrés Tapia discusses Brazil’s economic dissonance that is illustrated by the inequality evident at the FIFA World Cup 2014. 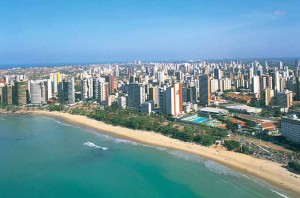 FORTALEZA, Brazil – Nearly three thousand kilometers north of São Paulo sits the city of Fortaleza, the commercial capital of Brazil’s phenomenal, if sputtering economic boom. In this city of two and a half million, fronting the Atlantic and host to five World Cup games, tales of boom and bust jockey for position as the overriding narrative of the nation.

Despite the official outcome of the games, this is the game to watch.

For Fortaleza’s residents, Brazil’s economic ascent has meant that hundreds of thousands have been pulled out of poverty. They are the basis of a new and aspiring middle class. The signs of their presence are everywhere: the latest in fashion trends adorn city streets, as do dogs on leashes, shopping as therapy, and the latest fitness craze.

The transformation is notable for a city that was once seen as a sleepy beach town attractive to adventure tourists and not much else. The city center today is awash with commerce. A stroll down the main boulevard, Praia de Meireles, offers views of the hip and kitsch. Trendy restaurants and hotels look out over the hourly parade of the Trem da Fantasia (the Fantasy Train) being rocked by local Mickey and Minnie Mouse knockoffs.

Even the foreign tourists in town for the World Cup are outnumbered by Brazilian tourists, from cities both near and far and flush with disposable income. Many come to claim their stake in the booming real estate market along Fortaleza’s shores, or in places such as tradition-filled Morro Branco and Canoa Quebrada, two hours to the north and south of the city.

“People have money to spend,” says one cabbie who goes by the name Derry. “Especially the poor. Education has made the difference.”

Like many in Fortaleza, Derry left his rural home to come to the city hoping to tap into the rising economic tide. Later, over a cup of tapioca gelato, he points out that even Americans are beginning to discover the place, noting that he’s begun taking English so as to better communicate with potential clients.

Still, not everyone in the city takes as rosy a view.

As in other major cities thousands here took to the streets in the days and weeks prior to the World Cup to protest the billions spent on infrastructure for the games, money they say came at the expense of more pressing needs. For these, the pageantry of the World Cup only served to reinforce a collective feeling of neglect.

Edson (who only gave his first name) works as a waiter in Fortaleza’s main square. We talk as he clears the table before me. He says he can’t understand how people can pay $750 for a scalped quarterfinal ticket or $450 a night for a hotel while his whole month’s rent is $250, leaving little room for his wife and two kids.

“It’s only for the outsiders,” he says resentfully of the beefed up security presence accompanying the games. “Once the Cup is over we will face the same dangers on the street we always have faced daily.”

Outside, street vendors, cleaning ladies, and the homeless rub elbows with swanky urbanites ready for a night on the town. It was one thing to be poor when the entire country was not prosperous, I muse. Quite another to see it get rich without you.

And so it is, back and forth in Fortaleza and much of Brazil, between the newly well off, those who have always been well off and are doing even better, and those who are being left behind.

One Brazil can proudly say that as much as this and other large cities were electric during the World Cup games they hosted, a place like Fortaleza is long past needing a World Cup boost to put it on the map. It has at its shores the Praia do Futuro (the Beach of the Future). There are now direct flights to Miami and Lisbon. And if Fortaleza’s name was originally derived from it being a fortress to protect Portuguese colonizers from the indigenous natives, it is now an economic fortress that has come into its own and is extending its reach.

At its foundations, however, lie the corrosive effects of inequality, the other Brazil. As FIFA took its ball and went home in July, it is not the nation’s sad national soccer seleção that residents must reckon with, but themselves.