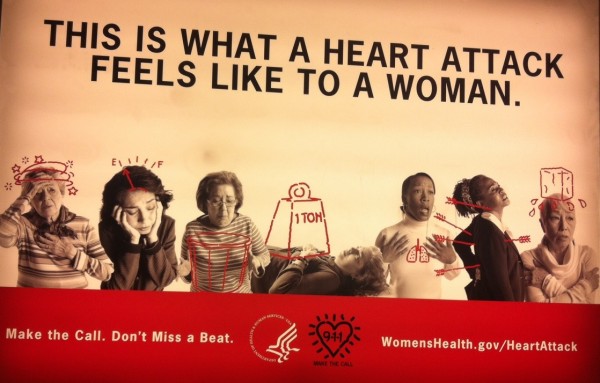 Rushing recently through Jackson-Hartsville International Airport in Atlanta I was stopped in my tracks by the billboard above.

With few words and compelling pictures, the billboard’s message prompted me to consider an issue I had not even thought about. Heart attacks. Every 90 seconds someone’s mother, grandmother, daughter, sister, aunt, or niece suffers a heart attack. Turns out heart disease is the Number One cause of death for women, outpacing breast cancer, strokes, and domestic violence.

By now, most of us are familiar with the typical symptoms of a heart attack. Crushing pain. Feeling of fullness or squeezing pain in the chest or upper portions of the body. Shortness of breath. Nausea.

The life-and-death issue of this knowledge? These are the typical symptoms that make men hurry to the nearest emergency room. Turns out that, according to the Centers for Disease Control and Prevention, almost two-thirds of women who die of sudden heart attacks have had no previous symptoms. And when women do present symptoms, they can be significantly different from the typical male’s symptoms.

It’s another example of the phenomenon I describe in my book, The Inclusion Paradox. And that is, in order to have true inclusion, we have to know how to constructively call out our differences instead of assume similarity.

Dr. Thomas Fisher, an emergency specialist and healthcare disparities expert who has taught at the University of Chicago and who now works for Health Care Services Corporation headquartered in Chicago, explains how calling out these differences can be a matter of life and death. He explains how physicians are trained to think about cardiac episodes as “crushing or pressure more like an elephant sitting on a chest.”

And when it comes to women, this is precisely the problem with the training. These are typical male symptoms. He also explains that there also can be racial differences in how the experience is described. According to Dr. Fisher, older African Americans often describe cardiac pain as “sharp,” which can lead doctors to another diagnosis. “If physicians don’t ask some follow-up questions, or describe it more carefully, that sharp chest pain may, in fact, be the type of pressure/crushing that leads to a cardiac diagnosis,” he says.

These life saving billboards pop up across the country including at a bus shelter in front of Jackson Park Hospital on Chicago’s Southside. It is part of a national public education campaign by the US Department of Health and Human Services Office on Women’s Health. The campaign encourages women and their families to learn the seven signs of a heart attack and to call 9-1-1 promptly.

Calling out our differences, whether in language or in experiences, can bridge the gap between doctors and patients, between confusion and clarity. Between life and death.

It’s about inclusion as a life-saving strategy.