Tattoo Barbie and the Power of Pop Culture 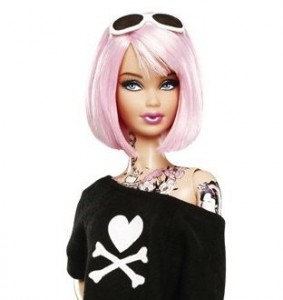 Pop culture has a way of both reinforcing traditional cultural mores and  also of mainstreaming outlier messages and attitudes. And particularly in the era of diversity and inclusion, Barbie has unexpectantly played a cultural changing role in this way.

For more than 50 years, Barbie, that mainstream America icon has enchanted or annoyed girls and women of all ages. It could be that Barbie’s pop culture stature has been a mirror of the ever changing mainstream society’s views of what it means to be a young woman.  After decades of traditional beauty queen obsessions with shopping and looking great, she started crossing gender role lines as an astronaut, a pilot, and a Nascar driver among 120 other occupations. As times changed, so have her friends who’ve become more multicultural: African American (Christie), Hispanic (Teresa) and Asian (Dana).

And now, to both the horror and delight of millions, we have Tattoo Barbie. The recently released tattoo Barbie is providing new fodder for debate. Women, both for and against tattoos, have weighed in on this latest Barbie version.

The negative  comments surface on a cyclical basis every time Barbie pushes the envelope. Some concerns are about whether she contributes to young girls’ and women’s insecurities about their body image. Do her impossible body dimensions encourage eating disorders and low self-esteem? Is she an appropriate role model for what adults want girls to think and believe? So while Mattel blew it when a version of talking Barbie said, “Math class is tough” Tattoo Barbie is hip and tough while still maintaining that ability to connect with the mainstream. And that very ability to normalize the cultural edge is precisely where her power for influencing and changing cultural interpretations lies.

While many may still cringe at Barbie’s materialism and impossible figure, Mattel has helped manstream diversity that has been scary or mysterious for many. She becomes a channel to try out new ways of being a girl and young woman. Now a group of Barbie fans is petitioning Mattel to create a bald Barbie. This is to help girls still feel pretty even though they’ve lost their hair because of chemotherapy treatments for cancer. The bald Barbie Facebook page has been “liked” by nearly 150,000 visitors as the momentum continues to grow.

Another group has taken a more do-it-yourself approach. African American women in Ohio have taken donated Barbies and restyled their hair to reflect a more natural hairstyle for black girls. Fro-lific, a Columbus, Ohio group of women committed to natural hair, admits that Mattel offers various African American versions of Barbie and her friends. Still, Fro-lific members maintain that most black Barbies have hair that seems more chemically straightened than a reflection of the typical texture of black girls’ hair. They donated the “naturalized” Barbies to a local girls’ organization during the Christmas holiday.

Whether sporting “tats,” going bald, or naturally “tressed,” whether she’s a bride or a Nascar driver, Barbie can play a role in influencing a change in cultural attitudes toward difference.