The Senses of It All: The Blind Proofreader and Other Remarkable Stories of Normalcy 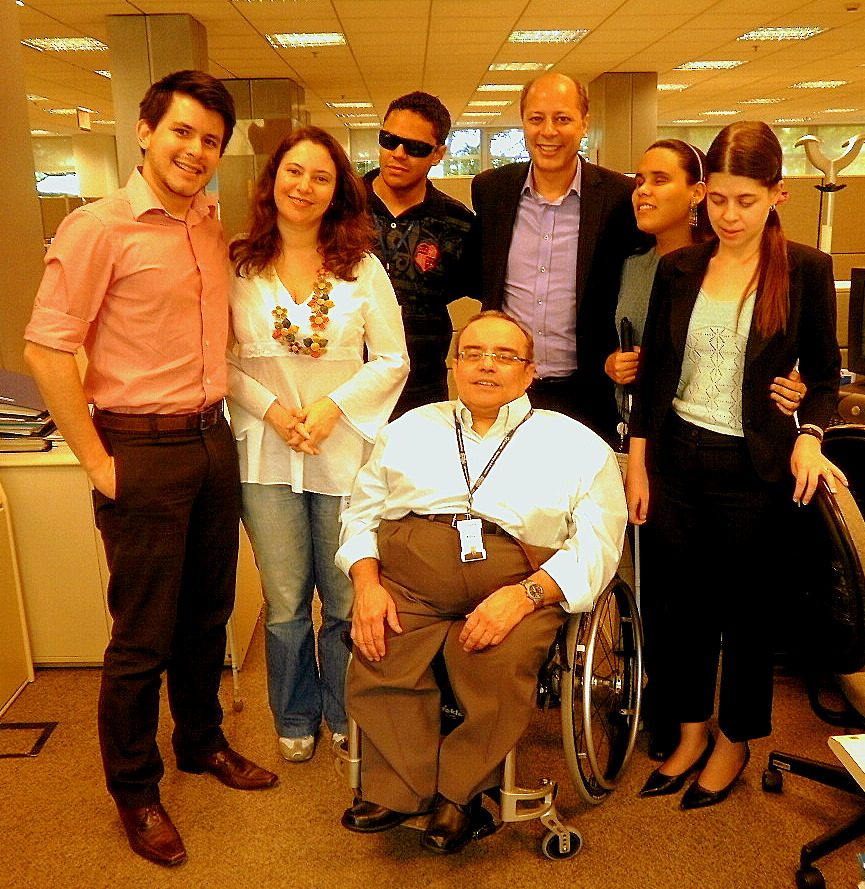 SÃO PAOLO — My synapses were crossed. In the executive dining room, engineer Felipe Trigueros could not hear me because he is deaf, so I turned to face marketing assistant Diego de Castro who could. But it was Felipe who needed me to look at him so he could read my lips while Diego couldn’t even tell which way I was facing. Then Diego turns to Felipe to say in Portuguese what I had just said in a combination of English and Spanish. But why was Diego soundlessly mouthing the words rather than speaking aloud? Oh, yeah, duh, Felipe is deaf!

A little later a sign language interpreter comes in to further facilitate the conversation for Felipe’s benefit, particularly as I am asking questions of my new acquaintances. But after a few communication gestures he stops and Diego picks up again with the silent mouthing. I don’t get it. Oh, yeah, duh, the interpreter is a Brazilian Sign Language interpreter and we are all mostly talking in English!

So let me back up. I’m at Serasa Experian, a leading Brazilian global information services company, at the invitation of their diversity leader, João Baptista Ribas. I had met João and his boss, Tomás Carmona, the head of Sustainable Development, on a previous visit. On that trip I learned how Serasa Experian’s holistic diversity and inclusion strategy had the its start in disability due to the need to respond to a law passed in 2003 that required companies in Brazil to have, depending on their employee size, anywhere from 2-5% of workers with disability.  How different to the genesis of holistic diversity in the US which has had its start in race and gender.  João, who has paraplegia due to a congenital malformation and is in a wheelchair, was hired to lead that effort. Once he had implemented what is a truly groundbreaking approach with salaried professionals with disabilities he has been building out the more comprehensive diversity and inclusion efforts.

The first time around João and Tomás had shared their holistic diversity strategies with me and sought my reactions. On this visit we were going to dive specifically into their disability diversity work by, most importantly, meeting and having in-depth discussions with the talent with disabilities Serasa Experian had hired. Joining João, Felipe, and Diego in the conversation were Nancy Galvão who is a journalist and whose right hand withered when she contracted polio, and Laís Kari, who is a proofreader and blind — yes she is, and is among Serasa Experian’s best doing that kind of work.

These individuals were not the token representatives of disability diversity. As I walked the hallways later I met and saw dozens of employees in wheelchairs, dozens who were blind, dozens who were deaf, carrying about the business of accounting, programming, writing, marketing, etc. It was extraordinary in its ordinariness.

What unfolded during the conversation was a narrative about the intersection of disability with identity, prejudice, humanity, career, autonomy, freedom, and ambition. Some highlights, first about their own experiences and beliefs and then some new thoughts they triggered for me:

THEIR EXPERIENCES AND BELIEFS

Autonomy and Independence Is the Greatest Desire; Freedom the Greatest Outcome
Whether in words or in their stories, Felipe, Diego, Nancy, Laís, and João said the same thing: for those with disabilities, autonomy and independence which lead to freedom to pursue their goals are their greatest desire and what they pursue relentlessly.

Of course, they avail themselves to technology such as the cochlear implant, the screen reader that magnifies text on computer screens, the TDD telephone, as well as other support mechanisms such as the sight dog, the translators, ramps, and doors that always open outwardly. Explains João, “People say ‘poor you, confined to a wheelchair.’ But they don’t understand. I’m not confined. Rather, my wheelchair means freedom.”

“When my hand withered due to polio,” says Nancy, the writer, “my mom wanted to kill me and herself. But I wanted to be a journalist. People said that I couldn’t, because I was the one with the disability, the poor little one. Today I earn more money than any two-armed person in my family and I think I can say I am one of the happiest.”

Laís picks up on this narrative, “The attitude on the part of society is ‘No walk. No study. No work.’”  But each of these professionals has ambitions as big and mundane as any able bodied person’s. Felipe has sought career advancement and gotten it, having been promoted three times in 2009 and 2010.

“One of my dreams has always been to go to university,” says Diego who started to go blind just five years ago. “I wanted to have a house and a family and I was not going to let my going blind stop that.” He can now scratch these three items off his to-do list and he’s ready to add a couple of new ones: go to business school and become a leader within the company.

Work Is Empowering and Humanizing
“When you don’t have a job you don’t feel like a human being,” says Laís. “And it’s not just about the money. It’s also about making friends, and discovering things about yourself you did not know you could do. And it’s also about our families changing their view of what we are capable of.”

And it’s in this last statement that the key to disability diversity lies. Family members and co-workers stop seeing the disability and start seeing the person. “The best moment,” says Felipe, “is when my co-workers don’t see me as deaf but rather as a very good engineer.”

Work also allows each of these individuals to pursue their inner passions and to now make a living off of them. When I ask Laís how she ended up being a proofreader she tells me enthusiastically, “I have always loved to read. I love the Portuguese language.” And with the help of a digital replayer which is software that reads aloud what is on the screen, Laís and Priscila Neves, another blind employee I met who is a psychologist, crank up the replayers to read back to them at 10 times normal speed — so fast that it sounds like gibberish to my untrained ear. Laís zips through the document she is proofreading and, like finding a needle in haystack, plucks out the typos and misspellings.

Their stories make clear how affirming and dignifying it is to have a job, not just for those who have a disability but, when seen through their eyes, really for all of us. Think about the power of the following statement by Laís: “Now I can buy a new refrigerator for my Mom.”

As I wrap up, let me give the final word to one of my newfound friends at Serasa Experian: “Disability is not a problem,” says the blind proofreader. “What’s a problem is convincing others that it’s not a problem.”