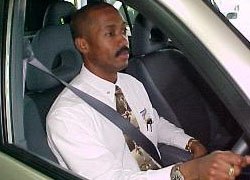 Wearing seat belts is cool … especially for young black men. That’s the message the National Highway Transportation Safety Administration (NHTSA) wants to get across. In a campaign targeted to the African American community, the NHTSA is trying to increase seat this group’s seat belt use.

The campaign can’t come a moment too soon. For a number of reasons, African Americans are less likely to buckle up than others. Overall, 75% of blacks regularly wear their seats belts compared to the national average of 83%. As a result, they suffer more vehicle fatalities, which is the leading cause of death for black children ages 1 to 14 and the second cause of death for those aged 15 to 35.

An article in New American Media quotes David L. Strickland, administrator for NHTSA, “I think a lot of it is frankly cultural barriers. … We have much lower belt usage among young people–period, especially young men who think they are invincible. People don’t want to be seen as a nerd, which is cultural as well.”

The NHTSA is partnering up with several black organizations, including the National Council of Negro Women, the Congressional Black Caucus, and the National Medical Association to encourage blacks to “buckle up every trip, every time.”

For several years, The NHTSA has been reviewing variations in seat belt usage and vehicle fatalities among different races and ethnicities. Diversity practitioners recognize that it only makes sense for the agency to tailor its messages to take into account those differences.

By acknowledging and calling out these cultural differences, the NHTSA campaign will save lives. There’s no greater benefit to the Inclusion Paradox than that.