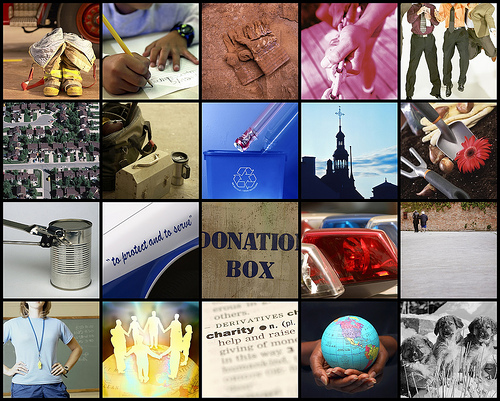 It’s true that corporate giving in cash has diminished during these recessionary times. But it’s also true that volunteerism has gone up — and not just the kind that lends a hand to building a house or serving food but the kind that uses specialized, highly valued marketplace skills in the service of community.

Through pro bono volunteering via organizations such as the Taproot Foundation, on behalf of not-for-profits marketing professionals create fund raising campaigns, HR practitioners design talent development programs, IT whizzes network donated computers for more efficient delivery of services, and on. While traditionally cash has been what not-for-profits have pursued single mindedly in their corporate development efforts to enable them to fulfill their missions and activate their programs, a more holistic approach to giving has emerged that is leading to a far greater impact on the part of corporations in their community involvement.

And this dimension involves the most powerful. While rank-and-file employees are volunteering more of their time with either a hammer or CPA degree, there are also the beginnings of change in how the top of the pyramid can exponentially multiply the impact of their power, cash, and influence.

“What would happen if the world’s billionaires became active philanthropists . . .  the kind who use all of their assets — their power as consumers, investors, public figures and role models —  to really bring about social change on a mass scale?” So asks Sharon Schneider on The Philanthropic Family blog, after duly lauding Bill and Melinda Gates and Warren Buffet for pledging half of their fortunes to charity.

Her answer has profound ramifications for socially responsible corporations: “The combined impact of increased social responsibility from the companies they could influence would dwarf the power of their charitable dollars funneled through nonprofits.”

She considers the following scenarios:

If Bill Gates insisted that only “conflict-free” minerals be used in computers and other electronics featuring Microsoft Office, manufacturing companies seeking computer parts would be motivated to find other sources of minerals and effectively close off a critical funding stream and thereby cripple the armed militias of the Congo.

If Warren Buffet insisted that every company in which he is a shareholder provided a decent paid family leave and established benchmarks for increased diversity among upper management, tens of thousands of women struggling to balance work and family would enjoy improved health for themselves and their babies, and their companies would save the time and expense of replacing them.

If Oprah decreed that only companies with fair supply chains would be the ones to receive the benefits of “The Oprah Effect,” millions of children around the world could be saved from child trafficking and forced labor as these practices become increasingly recognized and unacceptable to Ms. Winfrey’s loyal fans.

Schneider’s premise — that the most powerful single asset that can be wielded in society is not money, but influence — is, in fact, taking hold in the business world, which lays claim to 3/4 of the U.S.’s income, assets and human resources. According to Bea Boccalandro of VeraWorks, Inc., thinking of corporate social responsibility in terms of monetary donations alone is giving way to increased interest in employee volunteerism. The Boston College Center for Corporate Citizenship reports that over 90% of 203 Fortune 500 companies participating in a 2009 survey reported having employee volunteer programs. Nevertheless, vast untapped potential for corporations to make a positive impact still exists. In the Meeting the Collaboration Challenge Workbook, James Austin points out that only 8% of Fortune 500 companies with employee volunteer programs get employees involved, on average, for a day or more each year.

As more companies understand the benefits of employee volunteerism, that number is likely to rise. The traditional relationship between businesses and nonprofit charities — in which businesses contribute money to nonprofits and nonprofits convert that money into salaried positions and other resources — is problematic. For starters, businesses are expected to relinquish ready cash, the resource in highest demand. In addition, donating money only creates a shallow touch point between the business and the charity, rather than tapping into the might of the company.

By contrast, facilitating employee volunteerism creates a stronger, more personally felt relationship between the company and the recipients of its outreach, and it does so without tying up cash. Employees are often able to access non-cash resources: trucks laying idle over the weekend, prime location parking lots sitting half empty,  internal auditors experiencing slow times of the year, cafeterias with spare food and capacity, and so on.

Furthermore, research shows that businesses benefit internally when employees volunteer, in terms of improving their public image, reputation, and sales. According to Golin Harris, more than two-thirds of Americans consider companies’ business practices when deciding what to buy, whether to switch from one brand to another, and whether to welcome them as a neighbor. Studies also show that employees’ view of a company’s corporate citizenship affects team member morale, employee recruitment, teamwork, company pride, company trust and retention. A number of companies, such as Aetna and Green Mountain Coffee Roasters, have found statistically significant and correlations between ECE participation/awareness and morale. According to Maria Kim, Vice President of Resource Development and Strategic Initiatives at the non-profit Cara Program, “Skills based volunteering is so popular because corporate volunteers want to see the results of their work.”

There is also the promise of increasing employee skills. A national study by the Points of Light Foundation of white collar workers found that 74% of those who volunteered reported that it had had a positive effect on their careers. In a survey of professional women by Markitects, 83% reported that volunteering developed leadership skills, 78% reported that it developed communication skills, and more than half reported development in other workplace skills.

Boccalandro encourages her clients to consider case studies such as these:

Lancôme and Girls Inc. In partnership with Lancôme volunteers, Girls Inc. created Corporate Camp — a unique six-day experience that gives young girls from across the country full access to the corporate world and its successful female professionals. Girls are given insight into Lancôme’s product development process from start to finish; access to research facilities and brand strategy meetings; and face-to-face interaction with high-level executives, including representatives from Lancôme’s Marketing, Human Resources, Creative, Public Relations and Education departments.

Timberland and CityYear. It has become part of Timberland’s culture that each employee mentors a CityYear employee. Timberland’s willingness to leverage employees to support CityYear has not only resulted in significant youth mentoring within the communities that CityYear serves, but in new vendor contracts, locations and board members for Timberland itself.

These are just two of myriad similar stories as armies of volunteers deployed through innovative, strategic plans harnessed by a growing corporate/not-for-profit partnership fan out across cities, towns, and disaster struck areas such as the Gulf states washed over by waves of oil.

“Let’s applaud the Gateses, Mr. Buffett and others who have already pledged their wealth to charitable causes,” concludes The Philanthropic Family‘s Sharon Schneider. “But let’s also applaud the growing class of social entrepreneurs who start or work for businesses that don’t make them billionaires but do provide sustainable livelihoods, environmentally friendly products and social justice along with financial returns.”

Do you count your organization among them?