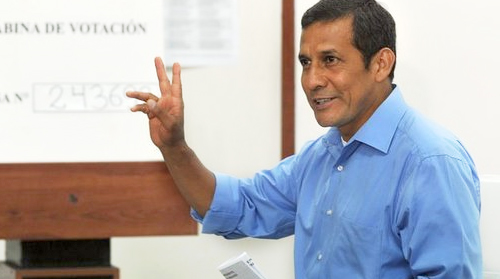 This article was published by the New America Media

No to trickle down economics. No to corruption. No to human rights abuses.

These were the electoral reasons why the Peruvian public elected Ollanta Humala, 49, as their 94th President, marking the sixth consecutive peaceful transfer of power since 1980.

In sending Keiko Fujimori to defeat, a very narrow majority of Peruvians indicated they were more troubled by her filial links to her father, former Peruvian president Alberto Fujimori who was imprisoned for corruption and human rights abuses, than with Ollanta’s two failed insurrections against democratically elected governments.

In fact, for many voters, these rebellions were seen as bona fides for his willingness to take matters into his own hands to bring about change. Those more ambivalent about this recent past were able to put their fears at bay either through wishful thinking, hope, or real belief that Humala’s radical, Hugo Chavez-like ways from five years ago were merely a phase, and that there was real substance to his recast image as a reasonable non-radical who could address the needs of the destitute poor without pitting them against the rich.

This is the first time in 40 years, since the Cuban-Revolution-inspired military coup of Gen. Juan Velasco Alvarado under which I grew up, that a leftist president will be ruling Peru. The big question is whether it will be in the mold of Venezuela’s Hugo Chavez, or that of Brazil’s Luiz Inacio Lula da Silva. The first would deeply and destructively divide the country. The second, which simultaneously and successfully made the poor a priority, while stimulating the economy, would be transcendent.

Key to Humala’s win was the full endorsement of Alejandro Toledo, former Peruvian president, who was originally one of the first round candidates in the presidential election. True to the twists and turns of Peruvian politics, one of Humala’s insurrections was against then-President Toledo.

While the recurring story lines of the election campaign were the Fujimori family’s disgrace and the radical past of Humala, the most profound back story was that Peru’s poor — heavily represented in the rural areas and outside the power center of the capital in Lima — decided Peru’s new President.

Despite the fact that in the last five out of six years Peru’s GNP grew at a steady 8% annually, making Peru a much richer country that could invest in infrastructure that brought in foreign investment, nurtured local industry, and helped make Peru a global tourist magnet, many of Peru’s poor have been left behind.

While it’s true that the poor of Peru have seen their numbers drop, from 50% of the population to 30% during the economic boom, Sunday’s vote declared that it is still unacceptable that one-third of the country is below the poverty line of $2 a day in earnings. Peru’s prosperity should be beneficial for all Peruvians, their vote proclaimed.

They believed Ollanta Humala, the maverick outsider with no links to the elite in Peru, the United States, Europe, or Japan, would be the one who would deliver. But there are jitters that his nationalistic, populist ways will derail the Peruvian economic miracle of the past few years.

His immediate top priority between now and his inauguration on July 28th, Peruvian Independence Day, will need to be calming nervous investors and markets, assuring them that his promises for the poorest of the poor can be fulfilled, while still nurturing the long Peruvian boom. This should not be difficult to do, at least rhetorically.

Already, some of those who did not support him are working on reassuring themselves that Humala will do right by the markets. As a commentator said on Panamericana TV, “There is no appetite to mess around with prosperity. Not even Humala is going to want to do that.”

Still, there is a significant amount of apprehension about whether he has a hidden agenda against the powers that be. And so when the stock market opened on Monday, it dropped 12.5%, the biggest one-day drop in its history, before regulators closed the market down.

Keeping a close eye will be his defeated rival. At 36-years-old, and having won nearly half the vote (she lost by just a few percentage points), Keiko Fujimori will remain a force to be reckoned with for some time to come.

But for now, this is Humala’s moment. As he addressed his supporters in his victory speech around midnight in rolled-up shirt sleeves and no coat and tie, on a stage that jutted out into the crowd at Plaza 2 de Mayo, he laid it out plain and simple. Without thundering against the elite, and without specifics, his message was all about the poor’s plight — lack of potable water, electricity, education, nutrition, health and living wages.

The poor have spoken. This is their man.