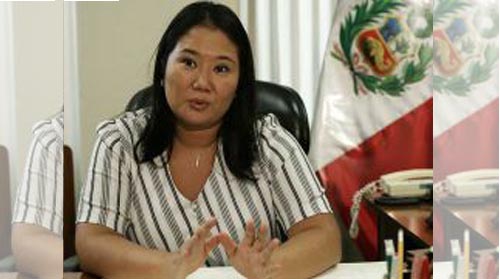 Keiko Fujimori lost Peru’s presidential election Sunday. But don’t expect the dynamic, if difficult, Keiko–age 36, female, Gen Xer, of Japanese descent, mother of two toddlers, spouse of an American and daughter of a former president, who is now incarcerated–to fade into the shadows of Latin American politics.

Keiko–as she’s known universally in Peru–has been the candidate of the unexpected and a force that likely altered Peruvian national politics for years to come.

At the presidential debate last week with her second round opponent–and Peru’s new president–Ollanta Humala, her opening statement had a greeting in Quechua–the language of the descendants of the Incas in the Andes of Peru. And her closing statement concluded with sign language.

What’s more, Keiko appealed to the youth vote by laying out her “Mi Primera Chamba”–My First Gig–scholarship program and to the Mom vote by promising to create nutrition programs and quality education for children.

This is not just typical political pandering in Peru, but stem from who Keiko is. She allowed TV hostess Magaly to come to her home. After they chatted like two girlfriends, she gave Magaly a tour of her middle-class home. Along the way she showed off Peruvian Andean landscape paintings her imprisoned father has done in jail, and then the pair ended up in Keiko’s kitchen, where she expertly chopped vegetables for that evening’s dinner.

When her parents split up in a bitter divorce during her father’s presidency, Keiko, then age 19, officially became First Lady to fill in for her exiting mother’s responsibilities.

Despite ample opportunities to go anywhere for college, she headed to Boston University to earn a degree in business administration. She returned married to Mark Vito, an U.S.-born IBM consultant, who did not speak Spanish.

Without a hint of self-consciousness, Keiko projected her Japanese visage on big screens at political rallies surrounded by a sea of dark-skinned indigenous Peruvians. Though her roots are Asian, she appealed to them as one of them, her racial minority physical features presenting a kindred-outsider status to the marginalized people of Peru–just as happened when her father ascended to power.

The elements of her biography don’t merely translate into images defying the status quo; they drive her fusion of a right-of-center and a populist political platform. Her ease with crossing socioeconomic and racial barriers has influenced a right-brain/left-brain, left-wing/right-wing heterodoxy that is both pragmatic and passionate.

Despite deeply held reservations by many Peruvians about her filial links to her father, jailed for corruption and human rights abuses, Keiko’s implicit and explicit diversity and her messages of inclusion, helped propel her into the second and final electoral round having beat out another former president, Alejandro Toledo, and a successful former minister of finance and economy, Pedro Pablo Kuczynski–a graduate of both Oxford and Princeton Universities, no less.

Presidential Candidate Mom
Keiko was also nearly the first Latin American female president with young children and, therefore, the first high-profile role model for work-and-family flexibility. As is typical of middle-class Peruvians, she has live-in childcare help. But her fluid movement in and out of her roles as leader and mother seems remarkably seamless.

After the first-round election results were announced and Keiko was declared one of the two finalists, Keiko handled her press conference with ease.

Afterward as she exited through the phalanx of journalists, her 18-month-old, Kaori Marcela, straddled in her left arm, Keiko took impromptu questions shouted out by journalists. As the child began to fuss, she switched from potential president of Peru to attentive Mom. With a smile, Keiko said, “Ok, it’s time–got to go.”

And with no apology, she left. Whatever else may come for Keiko, that’s what her multicultural country folk will remember. Keiko–young, centered and, without apologies, very much herself.

Now in her loss, she must plot out her next career move while Dad sits in jail with no chance of a pardon and her children continue to make their toddler demands. Meanwhile, she will watch as her rival takes the reins of the future she had been so certain was destined to be hers. She has time – a lot of it – to let things play out. Five years from now Keiko’s Magical Diversity Tour still likely to be fueled up and waiting for her to lead the way.