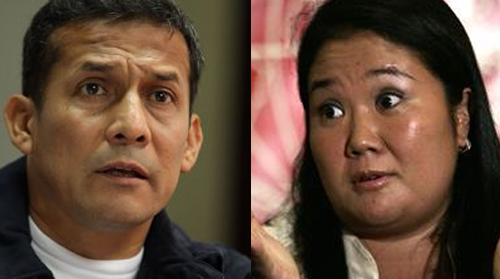 On Sunday, June 5, I will join thousands of expat Peruvians at St. Agustin College in Chicago to vote in the second and final electoral round in choosing the next president of Peru.

The collective mood of Peruvians is highly apprehensive about what’s next, despite–or perhaps because ofthe country’s substantial eight percent growth in gross national product in five of the last six years. That is among the highest in the world.

Sunday’s election is where the red-hot issues of race, gender, age, imprisonment, insurrection, poverty and economic boom will be shaken in a volatile political cocktail.

The choice between Keiko Fujimori and Ollanta Humala has come down to two candidates with a lot of potentially problematic baggage. Keiko is the daughter of former President Alberto Fujimori who is serving multiple multiyear sentences in a maximum-security prison in Lima, convicted of corruption and human rights abuses.

Ollanta led two failed insurrections in the Andes against democratically elected governments, and his father espouses an indigenous nationalistic ideology that borders on reverse racism.

These are not the kind of pedigrees that inspire change Peruvians can believe in.

Below the Surface
Yet…Yet, as is often the case in surrealistic Peru, what is on and below the surface, confounds logic. And unexpected turns of events can be equally damming or redemptive. Both candidates are exercising considerable effort to cut the binds of their political past.

In the final debate last Sunday between the two, Fujimori did her best to paint Humala as a destabilizing force, but he held his ground as someone who has recast his persona–aided by Brazilian political consultants–as a man of reason, rather than as a firebrand revolutionary.

And try as Humala did to link Fujimori to the corruption that had led to her father’s imprisonment, she stopped him in his tracks by asserting that Humala had spent most of his time debating the wrong person. “I am the candidate, not the man who is sitting in prison.” The sins of the fathers, she insisted, should not be visited upon their offspring.

While many Peruvians are willing to give Fujimori this pass–as she leads in the polls by about four percentage points but with a very large percentage of undecided voters– many are not.

Bitterness still surfaces at what many consider betrayal on the part of Alberto Fujimori, who arguably could have gone down in history as one of Peru’s greatest presidents after he tamed hyperinflation, defeated two terrorist movements, and laid the foundation for Peru’s sustained economic boom.

Whether it was willingly or coerced, Fujimori entered a Faustian pact with Vladimiro Montesinos, his head of DINCOTE, the Peruvian secret service. Montesinos bribed politicians, generals, TV station owners and journalists with bundles of cash, while he lead a brutal, no-holds-barred war against terrorism.

After separate fugitive escapes to other countries both men were dramatically captured and ended up in the same prison convicted by Peruvian courts on multiple counts. As befitting of a Latin American novel, they were initially incarcerated in  the same jail holding Abimael Guzman, the Peruvian Osama bin Laden. Through his Shining Path movement, Guzman had unleashed real and psychological destruction on Peruvian society. He had heroically been captured under the leadership of his current prison mates.

Terrorism, Torture and Human Rights
So it is that Peruvian society is highly polarized about Keiko Fujimori’s father in a way echoing the U.S. debate around whether torture– along with its the suspension of human rights– is justifiable when facing nihilistic terrorists willing to kill anyone and everyone.

But it wasn’t the human rights debate that sunk Peru’s first president of Japanese descent. Most Peruvians, who lived the sheer terror of Guzman’s Shining Path, with its car bombs and massacres, were willing to make their own Faustian deal by looking the other way as Fujimori’s regime put an end to the Shining Path’s madness–but only by responding in kind.

No, what did Fujimori in for many Peruvians, was the blatant bribery conducted in the name of a leader, who had established a new pragmatic, non-ideological paradigm for bringing about change.

It was under Fujimori that the longstanding practices of massive disregard for paying taxes came to an end, as he prosecuted many of the nonbelievers in paying state tribute.

Even as people were pissed off at having to pay taxes, grudging respect became growing respect for a president, who made it clear that there were rules all–with no exceptions even among the elite–had to follow.

As Peruvians got in line with the country’s new path, state revenues grew and were put into transformational use, building thousands of schools, kilometers of highways, electrical grids and water systems.

That the exemplar of rectitude had under his nose one of the most blatant bribery campaigns the country had ever seen was unforgivable.

It’s forgiveness, however, that’s on Keiko’s mind–or more accurately, a pardon. It’s no secret that she does not believe innocent people should be in jail and since she insists her father is not guilty, she would likely pardon him.

While Peruvians debate the limits of forgiveness, Ollanta offers another test.

His first presidential campaign five years ago when he lost to Alan Garcia was partially bankrolled by Venezuela’s Hugo Chavez. His policies are antithetical to the free market economic programs that have reduced extreme poverty in Peru from 50 percent to 30 percent. Massive foreign investment in Peru has fueled the economic transformation.

Still, that leaves one-third of the country in abject poverty, a damning metric. It is this proportion of the population that has declared trickle down a fiction and see in Humala someone who will plead their cause regardless of his history of insurrection or suspect influences. They are willing to make this Faustian tradeoff.

For Ollanta, though, Chavez’s well documented ambition to extend the Cuban Revolution into modern day Venezuela–and his eagerness to influence other parts of South America via Bolivia’s Evo Morales and Ecuador’s Rafael Correa–are the very things that may make enough Peruvians turn away from him and look the other way, yet again.

If so, they in turn will cast their own Faustian vote that may indeed free Alberto Fujimori, as the price for hopefully preserving the economic boom.