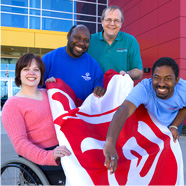 This is a story of busting up one of the biggest lies in society.

People with disabilities are among the most shunned diverse groups in society. They are often kept invisible in society and few make it into the workplace due to the spoken and unspoken beliefs that they can’t do the job. This creates a 44% unemployment rate, the highest of any demographic group.

Walgreens is resoundingly disproving the lie. At its Anderson, South Carolina distribution center launched in 2007, 40% of their 700 team members have a disability. Disabilities that are visible and invisible, physical and cognitive. There are people with Down’s syndrome, developmental disabilities, autism, cerebral palsy, missing limbs, schizophrenia, and other special needs.

And this unique talent mix not only “is good, it’s better,” says the leader behind the idea, Randy Lewis, Senior Vice President of Distribution and Logistics for Walgreens. The distribution center in Anderson, as everyone at Walgreens knows, is number 1 in productivity compared to all of Walgreens’ distribution centers. 20% better.

So what does it mean to be disabled? I think we need to talk instead about being differently abled.

In a speech to people at an industry conference, Lewis showed a picture of all the workers — with disability and without — in Anderson. “In this picture,” he said, “everyone can do the job. This was not about charity. We did not lower our standards, we did not lower the expectations of the quality and output. We offered same pay for same work.”

Not only is this diverse mix of team members achieving enviable business results, but they are doing so by living out diversity and inclusion values in pragmatic and substantive ways. Yes, said the various leaders interviewed in a Walgreens video about their efforts, we expected this to change those we hired who had disabilities since they are isolated from society. They have a job they are good at and love. They feel loved and supported.

But the surprise was how it changed the employees without disabilities.

One team member talks about how he is a better father to his children because of the character building that has happened within him as he has learned from the tenacity of those with disability he is surrounded by.

Back at the industry conference, Lewis tells his audience,”There is something about this experience that evokes all that is good in people. There is more of a sense of purpose, more teamwork, more patience. Disability can either be a source of pride or shame. It and it’s a choice we must make.” Then he adds, “Disabilities plays no favorites. It affects rich and poor alike. White and black, yellow and brown. We’re all broken and it helps to realize the united humanity we all have.”

The Power of Independence

Not only is the Anderson distribution center Walgreens’ most productive, but some of the top individual productivity stats in the whole Walgreens distribution system are held by people with disabilities. “People with disabilities don’t expect charity nor pity. They expect to be treated like others,” said a co-worker. “There are no different safety, accuracy, productivity standards.” The main difference other than the universal design of the center is how training is done.

In the video above, there is a quote by Winston Churchill that Walgreens has taken to heart, “The optimist sees opportunity in every difficulty.” The stories at Walgreens are remarkable in what this opportunity has done for the confidence and independence of team members with disabilities. There were some people who would not even talk, and were assumed not to be able to talk, or look at people in the eye, who today are quite talkative with each other and with the camera.

A Mom says about her son, “He feels good about himself every day now.” Another Mom added about her daughter, “It feel like she’s got a life now. She’s gone to new levels we never expected. Now that she’s independent…that was one of the pieces of the puzzle that was missing.”

This place changes everyone, Walgreens likes to say. “It changes how you look at people differently,” explains a manager. “Why are people doing and saying what they are doing? It makes us more cognizant of people’s feelings. The focus is the people and this has made us better managers.” One team member’s favorite sight is seeing mixed groups of co-workers go together to the local rib place for meals.

This myth-busting story creates a unique atmosphere that goes beyond the feel good. It also fuels heroic business stories. Lewis, who has three children including a son with autism, tells of how when the distribution center was going to roll out, in order to meet the deadline to go live, workers came in and worked every Saturday from July to November. “When I came in to spend time with them, I expected a lot of  them were going to be  asking me ‘when are you are going to get this equipment working’ and ‘when are we going to stop working overtime?'” Instead I got two questions: ‘how are we doing,’ and ‘what can we do better?'”

“Those with disabilities are waiting for us to discover their gifts, abilities, and contributions,” says Lewis. “This work is about extending that opportunity and that’s precious.” For example, here’s what happened for Angela Mackey, a manager at the distribution center. She has cerebral palsy. She got straight As in high school and college. When she graduated she sent out hundreds of resumes and interviewed fewer than 40 times. She got zero job offers. Today she is one of Walgreen’s highest rated managers.

“My biggest regret is that it took me so long to do this earlier,” sighs Lewis.

Walgreens is on track to hire 1,000 people with disabilities by the end of 2010. And they aren’t stopping there as they work toward a self-imposed goal to fill 10% of all production jobs at its distribution centers with people with disabilities. Toward this end, in 2009, Walgreens opened up a new distribution center based on the same universal design principles in Windsor, Connecticut and plans on opening up more.

What did it take to belie the lie that people with disabilities can’t do work? “It was not about the technology,” says Lewis, even though the plant indeed utilizes all kinds of cool and practical accommodating features. “That’s what every one thinks was the key.”

So what was it then? Listen to his answer, because it’s the most important answer you will ever hear about what it takes to make diversity and inclusion happen:

“It was about the decision to go forward.”